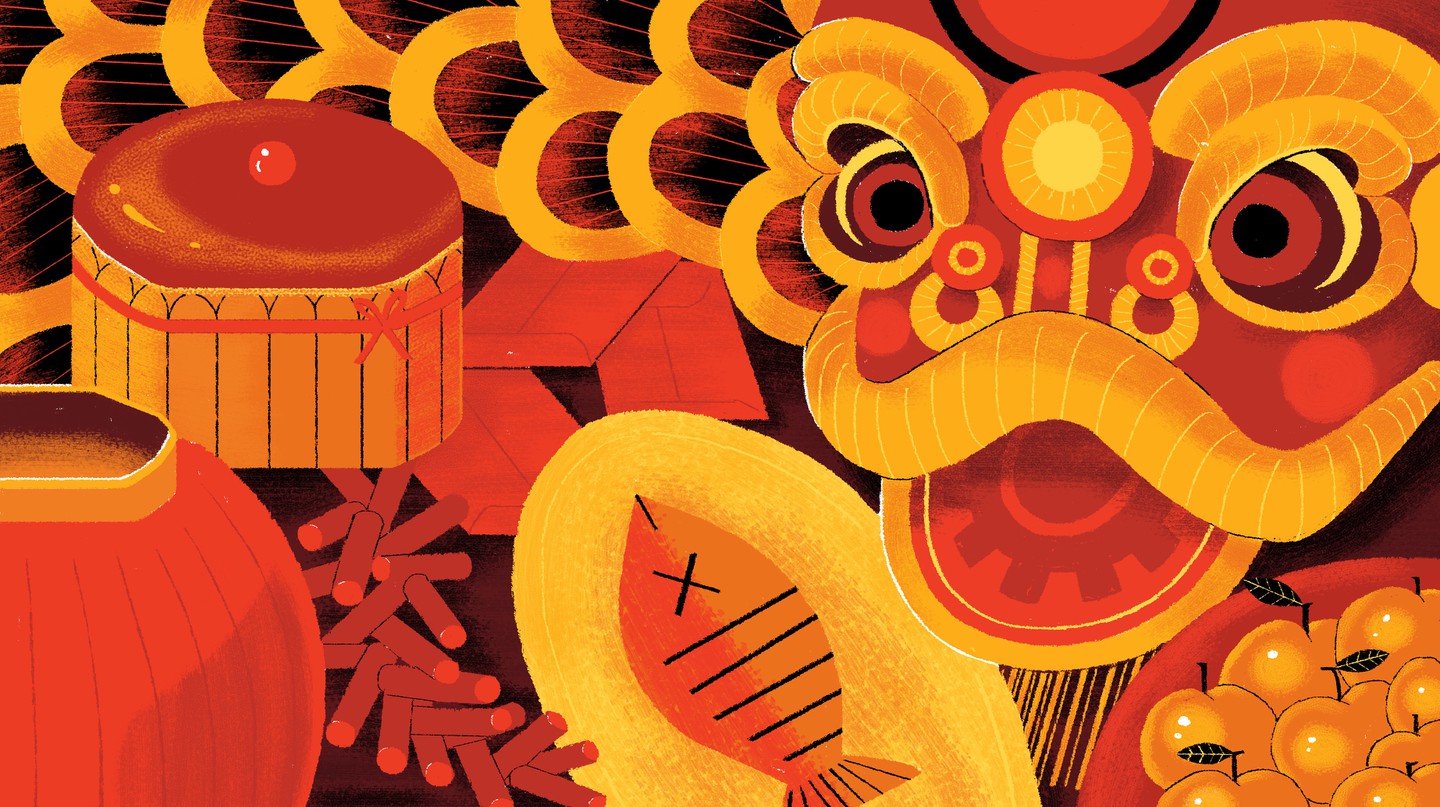 More than lanterns and dragons, Lunar New Year celebrations vary depending on the country in which you celebrate. With festivities taking place around the world, here are eight Lunar New Year traditions that will start the Year of the Pig right.
Most commonly associated with China, Lunar New Year is celebrated around the world. While most Westerners’ interaction with ‘Chinese New Year’ is watching parades in Chinatown, traditions vary from country to country. The holiday more aptly called Lunar New Year, as it marks the start of a new lunar cycle, is one of the most important holidays in Asia. From mouth-watering treats to impressive pyrotechnics, these are eight ways that people commonly celebrate the holiday.

Catch Up With Family and Friends

Lunar New Year (LNY) is a time to head home – here’s to hoping you still fit in a twin bed. So get ready to have your cheeks pinched, your plate filled and your life choices questioned.
Like many major holidays, Lunar New Year is best spent with family and friends. The tradition is so crucial that LNY travel is annually heralded as the ‘world’s largest human migration’. In 2019, 3 billion trips were projected to be made during the holiday season.
Family reunion dinners falling on LNY Eve also include ancestral worship rituals that connect the 3,800-year history of the holiday to the present. As part of starting a new year fresh, connecting with the people in your life is central to LNY.

Brighten Up With Some Colour

It’s easy to see when the Lunar New Year is around the corner – festive scarlet decor adorns every street, storefront and home. Being associated with wealth and good fortune, red decorations are hung to ward off Nian – a lion-like monster that is afraid of the colour red, according to LNY mythology.
In parts of China, where the holiday is called Spring Festival, bright floral arrangements and fruit trees also brighten homes and streets – peach and apricot blossoms hold special significance for the celebration of Tết in Vietnam. In Korea, birds join these decorations – decorative cranes symbolise longevity while magpies represent good fortune.

The bright red brings literal wealth in the form of red packets gifted to children and unmarried adults during the holiday. These red packets are cash gifts that can range from a few dollars to quite hefty amounts depending on the relationship to the recipient. Employers are also expected to gift red packets to unmarried employees as a sign of gratitude.
For Seollal celebrations in Korea, these presents take the form of red satchels, and monetary gifts are accompanied by encouraging messages and blessings of good luck for the new year.
In Tibet, where the holiday is called Losar, children bring gifts to their elders. On the first morning of LNY, children will don traditional clothing and bring a basket containing cooked meats, steamed dumplings, fruit, sweets and amdo balep, a traditional bread – no doubt helpful to adults who may have imbibed too much during the evening’s revelry.

Perhaps not the most hangover-friendly of traditions, LNY wouldn’t be complete without pyrotechnics. In China, New Year’s firecrackers are made from strings of rolled red paper containing gunpowder that, when set off, leave shreds of scarlet paper in their wake.
The belief is that the loud noise of the firecrackers serves to scare Nian, the lion-like monster who legend says rose from the sea for a feast of human flesh on the new year.
Nian mythology also plays out during lion dances across LNY festivities – one of the most globally recognised traditions because of its prominence in diaspora celebrations. This colourful traditional dance is performed outdoors to the accompaniment of drums and cymbals, sometimes as a street parade – or in the air, if a flying lion dance is taking place.

Clear Out Last Year’s Clutter and Splurge on New Threads

In the days leading up to LNY, windows are scrubbed, floors swept and furniture dusted to wash away the bad luck of the past year. However, all this cleaning stops on the first day of LNY – dusting is avoided on New Year’s Day, for fear that good fortune will be swept away.
Cleaning house may not seem like the most joyous of traditions, but as a ritual, it sets the tone for the new year to start fresh. And it isn’t just the house that gets an updated look for LNY. New clothes are also a part of the holiday celebration – a trend luxury brands have been keen to capitalise on.

Chow Down on Festive Treats

What holiday would be complete without a feast? This is also where celebrations of LNY vary the most. In northern China, people prepare and eat jiaozi (dumplings, 餃子) as part of LNY Eve. The time-consuming nature of their preparation allows for the family to spend time together, while their resemblance to an antiquated currency suggests good fortune for the new year.
For Tsagaan Sar in Mongolia, a tower of pastries is the culinary centrepiece. Long rounded scone-like cookies are arranged to evoke Mount Sumeru – a five-peaked mountain of holy importance to Hindu, Jain and Buddhist cosmology.
People eat Korean tteokguk (rice cake soup, 떡국) for Seollal. A person is said to age one year with each bowl of tteokguk they eat, but only the most auspicious restrict this delicious soup’s consumption to LNY. The clear broth symbolises a fresh, clear start to the new year, while rice cakes resembling coins offer prosperity.
Other foods like mandarin oranges, candied fruits and fish are also commonly eaten, displayed and gifted across cultures that celebrate LNY.

Ahead of New Year’s Day, open-air markets sell decorations, red packets, toys, clothes and trinkets. These outdoor markets are a frenzy of activity. In Southern China, street markets are also teeming with flowers and potted plants. Flowers like orchids and peonies are popular because they are considered especially auspicious.
Other outdoor marketplaces are associated with the religious aspect of the holiday. These are called temple fairs and take place after the holiday begins. Offerings usually include sugar-work animals from the lunar zodiac, prayer scrolls and incense. Somewhat similar to the Christmas markets in Europe, these markets are a way to embrace the holiday spirit.

Pray at the temple

The Lunar New Year season is a busy time for temples. Worshippers typically visit the temple on the third day of LNY to light incense and pray to deities for blessings and good luck in the year ahead. Many major temples will also put on festive dragon and lion dances in the courtyard.
In Tibet, tspedro lend colour to the decor – people leave these intricately carved butter sculptures as deity offerings. Ranging in size from small placards to massive recreations of temples and gods, their ephemeral nature and labour-intensive construction remind people to bring generosity into the new year.
As with any traditional holiday, observance varies depending on the individual. Many of the most auspicious traditions are symbolically observed, though younger generations tend to eschew their importance. LNY is an excellent time to visit and learn about one of the world’s major cultural traditions, but as with any cultural activity, deference to local custom is key to ensure everyone is able to enjoy the holiday fully.

We treat our clients like family. We never talk down and no house is too big or small. We are simply here to help you.